"Beauty and the Beast" 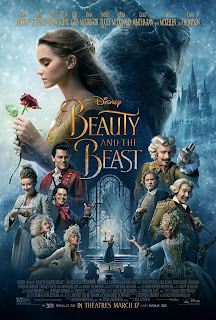 Any commentary that I -- or anyone -- could offer up about Disney Beauty and the Beast, as the poster calls it, is rendered entirely irrelevant by the film's $1 billion box-office take, $463 million of which (so far) has come from the United States.

Whether it's any good is completely beside the point, but, in fact, it's neither as awful as it might have been nor anywhere near as good as it could have been.  Back in the late 1970s, there was a musical act called "Beatlemania," which billed itself with the phrase: "Not the Beatles, but an incredible simulation."  That about sums up Disney Beauty and the Beast, particularly for anyone with fond memories of Disney's animated 1991 original, which is just about anyone who will see this version.

Watching it is akin to watching a very expensive cover band: It's amusing and reminds you of what you loved about the real thing, but it's impossible to say if it's good or bad.  That's not the reason it exists.

The biggest difference between Disney Beauty and the Beast and Disney's first Beauty and the Beast is that the animated version version runs about 45 minutes shorter, and is frankly all the better for it.  The original's screenplay by Linda Woolverton is a miracle of economical storytelling, wasting not a single minute even when it pauses for songs.

The live-action version pads the core story with an elaborate history for the Beast, an even more elaborate and detailed backstory for Belle, and a lot of digressions, plus several new songs that bring the movie to a screeching halt.  They miss the wittiness, melancholy and insight of the original songs by Howard Ashman and Alan Menken, and one of them a song Belle sings about her mother's death from the Black Plague is barely more than a few lines of sung dialogue.  It's not entirely clear why the filmmakers felt that a side story about the Black Plague would be a good addition to Beauty and the Beast, but there it is.

Nor does it make a lot of sense, except from the standpoint of campaigning for an Oscar at the end of the year, that the additional songs aren't the weak-but-better additions from the Broadway show, though underscore music from those numbers plays frequently.

The production design is overstuffed with rococo frills and gilding, a little of which goes a very long way, especially when it comes to the look of the enchanted creatures like Cogsworth the Clock and Lumiere the Candlestick, whose facial features are hard to recognize and even harder to love.  Veteran actors like Ewan McGregor (Lumiere), Emma Thompson (Mrs. Potts), Ian McKellen (Cogsworth) and even, fleetingly, Stanley Tucci as a piano-player-turned-piano make precious little impression.

So, that's the bad stuff, along with the Disney versions' ever-problematic timeline (at one point in this version, it appears the Beast's castle is about a two-minute horse ride from Belle's village.)  The middling stuff mostly revolves around Emma Watson as Belle, who seems too modern and self-aware as a character and too stiff and self-conscious as an actress.  Despite her years growing up on the set of Harry Potter movies, she doesn't seem to have quite mastered the fine art of looking at things that aren't there, so her gaze is mostly fixed in the middle distance, never focused on any one thing in particular.

The movie overuses digital effects to the point of distraction, making the same mistake that so many science-fiction and action films make: It does things because it can, not because it should.  Far too many characters, moments and scenes look entirely artificial.  On top of that, much of the movie is set at night, with a climactic battle bereft of color and more dimly lit than comfortable.

But then there's the good stuff, and there's more of it than I expected, beginning with two strong male performances -- no small irony in a movie primarily produced for young girls.  Luke Evans makes a great Gaston, and if he's mostly, like the rest of the cast, emulating the original animation, he does it with great flair and humor, playing down the physical and playing up the vain.  Likewise, Stevens is convincing and touching as the Beast.  Even though much of the Beast's physical presence seems digitally enhanced or even created, Stevens imbues the Beast a genuine warmth and depth.

But finally, and just when everything seemed hopeless, the film blooms to life for its final moments, and can't be dulled even by the dark-to-the-point-of-squinting battle-scene climax and the weirdly unfunny physical humor with the enchanted objects.  Disney Beauty and the Beast nails its final moments with pitch-perfect charm in a ballroom sequence that is one of the rare moments when the live-action version outdoes the animated one.  It's a great scene, one that sends the audience out on a sugar-and-magic-induced high.

Catching Up: "The Invitation" 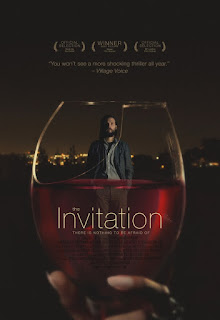 You won't see the end of The Invitation coming, but the beauty of the film is that within its tight narrative confines, the final few shots make perfect sense.  And when you think back on how the film begins, and all of the odd and puzzling moments it contains, the movie delivers a rare sort of satisfaction.

It opens with a slightly clunky and hipster-low-budget kind of feel, and its opening scene tries a little too hard to build both foreboding and foreshadowing as grungy-handsome Will (Logan Marshall-Green) and his girlfriend Kira (Emayatzy Corinealdi) drive to a dinner party that's being held in the expensive, mid-century-chic home of his ex-wife Eden (Tammy Blanchard) and her husband David (Michiel Huisman).

Will hasn't been in the house since he and Eden divorced following the accidental death of their son, a loss he is still grieving.  The dinner party seems intended to wash away that sadness.  Eden has invited a handful of their oldest friends to the party -- and if that setup sounds a little like an Agatha Christie mystery, it is.

Nothing at all seems right about this party, especially not the hosts.  Her guests are all dressed casually, as befits a group of longtime friends, but Eden appears wearing a flowing white gown, and her plump-lipped smile seems to be hiding some unsettled emotions.  David, meanwhile, keeps trying to lock the doors, and thinks the best way to break the ice with everyone is to show them some deeply disturbing videos.

Plus, there are those decorative security bars all over the windows.

Yet Will seems to be the only person who thinks there's something amiss.  Is it just his mind working overtime?  He and Eden are the only ones for whom the house is haunted by its tragic past; perhaps he's just dealing with some difficult emotions.

But then there's the matter of the two strangers who show up at the party, an anxiety-inducing raw nerve named Sadie (Lindsay Burge) and the burly, quiet Pruitt (John Carroll Lynch -- watch him loom in his early scenes), who clearly don't belong.

The Invitation is marketed as a horror-thriller because there's really no easy category for it, but at its warped and twisty heart is a mystery -- what, exactly, is going on?  It's the most effective sort of mystery, too, because it has an answer, though you'll be excused if you find that the answer just begs more questions, some of which I expect would be answered upon viewing it a second or third time.  If it were a novel, you'd finish the last page and immediately start thumbing through the early chapters and smack your head for not noticing the clues.

For some, I imagine The Invitation will feel a little too slow and measured, a bit overly relaxed about its pacing.  But as its characters -- some of which, like the gay couple, are simple tropes, while others hint at more complexity -- are effective at building a sense of off-kilter dread.  Blanchard is a standout as the emotionally wounded Eden, who seems to have a newfound calm, though one of a chilling sort.

Tightly wound, carefully constructed upon a foundation that turns out to go deeper and be more solid than it might appear, The Invitation shares a fiendish kind of forethought with Jordan Peele's Get Out, and director Karyn Kusama is willing to take her time getting where she's going.  It all leads up to those final few shots, which are about as fulfilling and as intriguing as they come.

A shaky start leads to a brilliant finish, and this turns out to be an Invitation you don't want to decline.