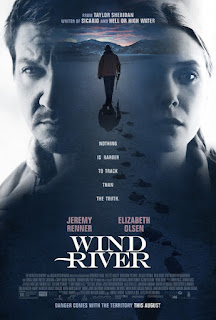 It begins in loneliness, isolation and, yes, fear.  A solitary figure, it seems to be a woman runs through a hostile and unrelenting landscape, clearly afraid of whatever might be following her.  What has she done?  What has been done to her?

She collapses, and that's the moment that sets up the story of the bleak but utterly mesmerizing Wind River, which is set on a sprawling Native American reservation in Wyoming.  It's an area the size of Rhode Island -- 3,400 square miles with a population of 40,000 people.  But this isn't a society filled with cops and CSI investigators and the kinds of crime-fighting characters you see on TV.  Writer-director Taylor Sheridan, whose script for Sicario turned that into one of the most aggressive and disturbing crime dramas in a very long time, knows how to turn an stark, uncompromising environment into a backdrop for compelling drama, and very little about the Wind River reservation is anything less than stark and uncompromising.

This is not a film like The Revenant, in which the wilderness was seen as vast, untamable but beautiful, or a standard Western that's set against a backdrop of striking desert vistas, ready to be settled by strong-willed men and women.

Wind River is brutal.  "Did you guys get the memo that it's spring?" asks the freezing, shivering FBI agent Jane Banner (Elizabeth Olsen) to a group of local law-enforcement officials who laugh at her joke from somewhere deep within multiple layers of fleece and down.  Jane has come from Las Vegas to investigate the murder on the reservation, and she has come alone.

It remains unspoken throughout Wind River, but there within the uncomfortable pauses and knowing looks, there's a clear message: Americans don't care what happens on Indian reservations.  Sure, maybe the casinos, but those are way out on the fringes of the territory; what happens deep inside, where people have their lives, is something we don't want to know about.

The most unnerving thing about Wind River isn't the mystery at its core, though that turns out to be pretty unnerving, but the way it lifts a heavy, opaque curtain on a part of American life that most people are quite content to keep hidden.  This is a world of desperation, with little access to standard resources, nothing in the way of the kind of daily support we are so used to receiving, and a basic assumption that, you know, they're Native Americans, they like it like this.

Within moments of arriving, Jane is aware that she -- and the couple of law-enforcement agents on the reservation -- is in way over her head.  She has no idea where to start.  She gets help from a local U.S. Fish & Wildlife Service hunter named Cory Lambert (Jeremy Renner), who works the land to keep predators away from the livestock.  He has spent his life looking for tiny clues in the snow and in the woods that other people would overlook.

Cory used to be married to a local woman.  They're divorced now, and she's bound and determined to get off the reservation and make something of her life.  She's not going to get caught here the way he has been -- trapped not just by the land and its circumstances but by memory: She and Cory used to have a daughter, who was also murdered.

Through sparse dialogue that spends almost no time on words it doesn't need, Wind River becomes increasingly complex.  The tribal police chief Ben (Graham Greene) knows a lot of things he wishes he didn't about the desperate lives of the people he protects.  The father (Gil Birmingham) of the dead girl does not know how to begin to grieve.  He is lost; another bit of his own history has been stripped away from him.

And then there is Natalie (Kelsey Chow) herself, whose story turns out to be nothing at all what we imagine it will be.  Wind River is like that, it begins with a lot of correct assumptions about what we think of Indian reservations and the people who live on them, and then it slaps them away -- violently, sometimes, even angrily.  But never with righteousness.  It turns out Wind River has a lot it wants to say, but writer-director Sheridan makes sure never to lose sight of the striking procedural drama at its core.  It's an aching, sad, maybe even bitter film, but it's also one of the best murder-mysteries in a long time.

Its large and convincing cast reflects the vast canvas on which the very personal story plays out, and though the movie has a lot of characters and a lot of story to tell, it's all held together by the two arresting central performances by Renner and Olsen.  Wind River uses Renner's sleepy, sad and slightly battered face to its best advantage; Cory is a man who is just on the verge of giving it all up himself.

And Olsen has the kind of strength and clear-eyed intelligence that people say movies don't give women a chance to display.  This one does.  Olsen is a revelation here, an FBI agent who maybe grew up herself watching Jodie Foster play Clarice Starling and has used that merely as the foundation for her own inspiration.  As played by Olsen, Jane is deeply aware of her limitations (early on, she's got one of the best off-handed bits of character exposition in movie history) and of her deep sense of justice and integrity.  She does not believe the people she is trying to help are being treated fairly, but she also knows there is little she can do about it except solve the crime and try to help them find some closure.  She'll follow the clues where they lead.

And where they lead is nowhere you'd expect.  Wind River reaches a thoroughly satisfying, genuinely unexpected climax: bloody, shocking, intense.  So much of the rest of the film has been slow and tense, like the buildup to a winter storm.  When it hits, it's a whopper.  So's this movie.

"An Inconvenient Sequel: Truth to Power" 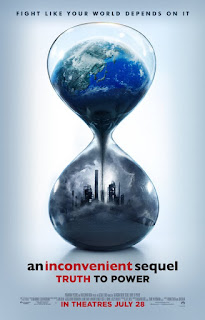 An Inconvenient Sequel: Truth to Power is going to convince exactly zero climate-change deniers that their position is wrong, and it may convince a few people that they should become evangelists for former Vice President Al Gore's impassioned endeavors, but first and foremost, An Inconvenient Sequel should be a good movie, and the problem is it's not.

Because it's not particularly good, An Inconvenient Sequel will be even more vulnerable to attacks from the right than it would have if it had been as incendiary, bold and committed as An Inconvenient Truth, the Oscar-winning film from 2006 that became a flashpoint for awareness of global warming.

The response to An Inconvenient Truth was both alarming and sadly telling -- rather than acknowledge the detailed and convincing scientific evidence Gore presented in his elaborate PowerPoint presentation, opponents began denying the facts, leading us, well, to where we are now in the world: If you don't like the information you're getting, just flat-out deny it.  The success of An Inconvenient Truth, as well as more liberal-leaning documentaries from filmmakers like Michael Moore, resulted in a slew of cinematic responses, especially from arch-conservative Dinesh D'Souza, which took opinions and half-truths and distorted them into the form and shape of a "documentary."

So, the real challenge for An Inconvenient Sequel is to find a way to offset those quasi-documentaries and present compelling information in a way that is so incontrovertible that it can't be denied, while acknowledging the rise of conservative opinion-oriented commentaries that are presented as facts.  If An Inconvenient Truth was a small stepping stone on the way to our facts-versus-"facts" society, how would its sequel remark upon the role it played?

The answer is: It doesn't -- and it fails, sometimes stupendously, in the challenge to create a new, less partisan view of climate change, to win over the skeptics and showcase the way the earth has been changing in the last decade alone.

An Inconvenient Sequel certainly does present chilling, often downright depressing, evidence.  The scientific data along with the eyewitness video of weather-based calamities combine to sobering effect.  If the film focused on those elements, it would be a winner, a worthy follow-up to the eye-opening original.

Instead, An Inconvenient Sequel ends up being near-hagiography of Al Gore.  This is a movie made for people who see Gore as an innocent victim whose still-stunning loss of the presidency is something they'll never quite get over, who still believe we should have had eight years of President Gore and are still bitter about it.  An Inconvenient Sequel commits the tactical error of not making climate change the subject but of making Al Gore the subject.

In one galvanizing sequence, Gore visits Miami and sees the city overwhelmed by water that local politicians admit has only one source: sea-level rise.  He wades around in rubber rain boots while city officials express understandable shock at how quickly the predictions from the first film have come true.  But instead of adding to our understanding of the problem, the cause and the solution, An Inconvenient Sequel spends the next 10 minutes getting ready for a presentation, being interviewed by media, and proving how indefatigable he is.

I've no doubt that Al Gore is committed.  I've little doubt he is sincere that he does not want to be a politician anymore --though the movie more than hints that maybe he's still got it in him.  And in its most effective moments, An Inconvenient Sequel left me with little doubt about the benefits of solar energy.  (Though highly ineffective as a movie, An Inconvenient Sequel is a tremendous, and shameless, infomercial for Solar City.)

But it also left me thinking that it was all a huge wasted opportunity.  While it's interesting, and illuminating, to learn the details of the machinations behind the Paris accord, it's disconcerting that a movie theoretically 10 years in the making misses its chance to comment on climate-change deniers.  The original film was filled with scientific evidence, but this film makes no effort at all to attack the pseudo-science of skeptics.