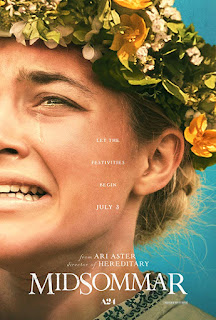 This is not a movie I would want to experience again, but Midsommar is also one I will not forget easily, and will think about for some time, replaying not just its horrors but its careful exploration of themes like grief, friendship, community, commitment and tradition.

This second film by Ari Aster, who directed the distressingly overrated Hereditary last year, again goes for an arthouse-horror vibe, with methodical camera work, deliberate pacing and a cool dispassion.

In part, the movie's off-putting numbness mirrors the mind of its main character, Dani (a brilliantly committed Florence Pugh), whose life is unraveling in ways both catastrophic and mundane. Her boyfriend Christian (Jack Raynor) wants to break up with her, egged on by his friends, including Pelle (Vilhelm Blomgren), a Swede who has invited Christian and his pals to the remote commune where he grew up for a days-long festivity celebrating mid-summer. Dani invites herself along.

When they get there, things are both bucolic and disturbing: The sun never sets, and the locals seem a little too eager to share their psychedelic drugs. As the group learns more about the commune, things turn terrifying (and stomach-churningly violent) with alarming speed.

Filled almost to distraction with legend and folklore, Midsommar is part fairy tale, part horror movie, and part anthropological survey. It's also deeply, deeply unsettling. Beautifully crafted and tremendously acted, it's a movie that can neither be ignored nor, perhaps, even enjoyed -- but it is never less than something remarkable to behold.