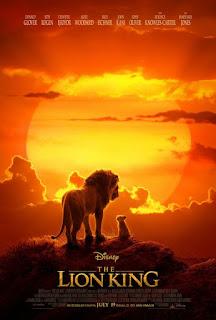 Does every generation get the movies it deserves? If so, what, I shudder, does The Lion King say about today's audiences? That they lack imagination? That they'll take anything they're given, as long as it's sold to them with a massive marketing campaign? Or is it that they seek the comfortable, want no challenges?

It is not easy to find a note of happiness in anything director Jon Favreau's relentlessly, almost impossibly exacting replica of the original 1994 film might be saying. It is purely an exercise in creatively bankrupt marketing prowess. It is a soulless effort to showcase technological superiority. It is an important piece of "creative content" that will be shortly used to market Disney's streaming service.

It is not lacking in entertainment value, any more than a full-size, high-resolution photo replica of the Mona Lisa is lacking in beauty. There is still grace in the opening "Circle of Life" theme, still humor in Pumbaa and Timon (despite some grating and stereotypical gay lisping of Billy Eichner as the latter), still emotion in Rafiki's revelation to Simba about the lion's destiny.

And yet, to what end?  It is often visually stunning, more often visually weird -- rendered realistically, it is non-sensical to hear animals sing and talk. Its story takes place across one of the strangest African geographies (sand dunes give way to jungles within moments). And on the whole it's entirely adequate. No more, no less. Undemanding audiences will adore it and will ignore the more insidious message lurking within its computer-generated wonders:

By taking a classic of hand-drawn animation and turning it into a mega-budgeted CGI extravaganza, Disney is saying that its own past -- our own past -- isn't good enough. That its movies are as disposable as sneakers or Mickey Mouse ears from Disneyland. No, not even that good, because Disney doesn't even want its own movies to be souvenirs anymore. In this new Disney world, movies are ... old sneakers. That's distressing.