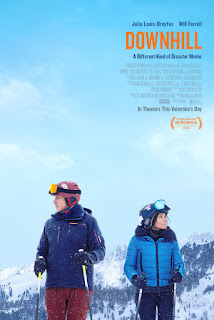 It's a brave thing to take on a movie as complicated, introspective and uncomfortable as Force Majeure and try to turn it into something resembling a mainstream Hollywood film, and for that directors Nat Faxon and Jim Rash (with co-screenwriter Jesse Armstrong) deserve more credit than they'll probably ever get. They've actually done an admirable job, but they've also cast Will Ferrell in one of the lead roles, which is, to be generous, a mistake.

On the other hand, there's Julia Louis-Dreyfus, who comes close to rescuing the movie from Ferrell's avalanche of bad choices. He is exasperatingly impressed with his own inflated sense of comedic genius, completely disconnected from everything around him. Mockery comes so naturally to him that his efforts at sincerity are forced and unconvincing. He's the worst part of the movie; unfortunately, he's also the main part of the movie.

He plays a husband and father who makes a miscalculation during a Swiss Alps vacation that undermines his wife's sense of stability and commitment. As counterpoint to Ferrell's inept atttempts at drama, Louis-Dreyfus she shines in every scene she's in; with just a look she's able to years of hostility, resentment and, somewhere in there, love. She fills the movie with a sense of uncomfortable loneliness, but both her co-star and the script cast her adrift (quite literally for a while), and Downhill never achieves the sustained mood or moral ambiguity of its superior, Swedish inspiration -- though it's impressive that it even tries.
Posted by John at 9:04 PM