"Portrait of a Lady on Fire" 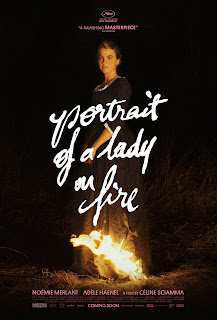 In the end, the quality of the best romantic films can be determined by the final shots. Think about The Way We Were or Bridges of Madison County or Call Me By Your Name and the exquisite heartbreak of those final moment. Portrait of a Lady on Fire comes achingly close to achieving that transcendence, and I had to wonder why it just almost worked despite perfect performances and a visual magnificence that is truly rare.

There's a much buzzed-about (quite literally; see the movie, you'll know what I mean) scene in the middle where the two protagonists – the aristocratic Héloïse and the working-class painter Marianne – accompany the household maid to a nighttime gathering of women, who sing the most haunting song you might ever have heard in the movies. While it's impossible not to be struck by the beauty of the moment, it overwhelms the story.

Though the movie certainly brought me closer to these two women (played by Noémie Merlant and Adéle Haenel), yet they both are decidedly impenetrable. The movie held me at a distance until close to the end, when one accuses the other of the passions of jealousy and possession, and finally their repressed emotions come to the fore. In a movie about same-sex romance in the 18th century, repression is to be expected. Yet by that final shot, when one character breaks down while she listens to a symphony, I wanted to break down, too, rather than be intrigued, but not consumed, by the fate of these women and their love.